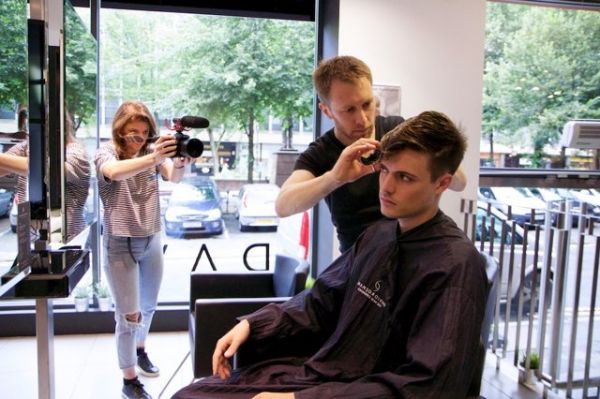 Last month we welcomed YouTube sensation BluMaan (Joe) back to our Manchester city centre salon with his film crew.

It's all part of an exciting link up between David Rozman and BluMaan where we'll be selling BluMaan's Original pomade both instore and online - and also filming more styles together in the video.

BluMaan's latest video filmed at David Rozman went up last week and has already been viewed over 125,000 times. In it David gives BluMaan a forward pompadour, which is a different take on the classic pompadour for men whose hair is a little too short for the full version.

BluMaan was a client at David Rozman before he became a YouTube star and it's great he continues to come to the salon when he's in Manchester. In the latest video BluMaan says David Rozman is his "favourite salon in Manchester" and that David is "a true artist".

Creating the style, David used scissors throughout - only using clippers towards the end to complete the final look.

David Rozman is now selling BluMaan's Original styling pomade  instore and it will shortly be available online through the salon's Feel Exclusive hair and beauty product website so customers can get the complete BluMaan look.

Do you have what it takes? David Rozman's "THROUGH THE LOOKING GLASS" We Are Back Open For Business! My David Rozman - From no volume, to full volume (Kelly's story) New Year, New Hair, New You