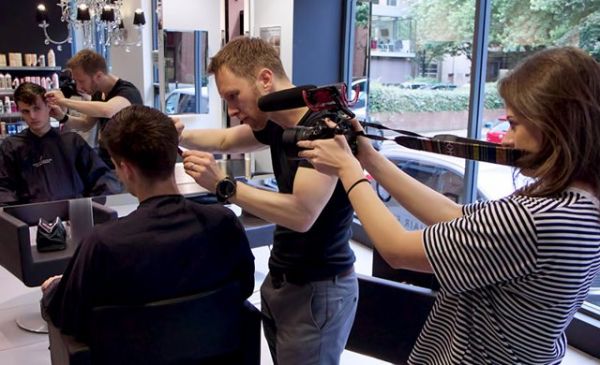 We were lucky enough to have YouTube star BluMaan in the salon again today, filming for his channel. BluMaan - or Joe as we know him - has been a client of mine for some time and from back before he became a well known name. He often heads to David Rozman for a hair cut when he's in Manchester.

BluMaan is exactly as you see him on his videos and a real professional. There's no make up artist in tow - he really is that good looking and yes he does have great hair. But he also knows how to make the best of it - choosing styles that will work for him, giving lots of input about what he wants and knowing the importance of the right product to get the look just right. He's a stylist's dream really.

At the salon today we gave him a twist on the classic pompadour - something I've decided today to rename the crompadour - a mixture of a crop and a pompadour. That's because it was a mixture of a very short cut at the back and then a groomed pompadour on top. And of course BluMaan's own pomade for texture. The finished look was as you can see fantastic. We're always up for the challenge when BluMaan comes to the salon and we look forward to seeing him again soon.

David Rozman's "THROUGH THE LOOKING GLASS" We Are Back Open For Business! My David Rozman - From no volume, to full volume (Kelly's story) New Year, New Hair, New You Chanel Inspired Party Season Hair